Hello everyone.  Good heavens, it's been almost a month since my last post.  I've been mulling things over a lot, keeping busy, and changing gears a little.

First in the news department...my little dog Agnes, who died at the end of February, sigh, is pictured on the cover of the magazine Quilting Arts, the June-July issue.  My friends from the Central Valley who gave Agnes to me, have a cousin, Joan Sowada, who came over one day to photograph Agnes and then constructed the fabric picture of her that's featured in this issue of the magazine.  It perfectly captures one of Agnes'  'looks' and her funny little under-slung jaw, full of kindness and determination. 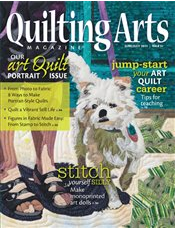 And here is a little felted piece I made of my little pal, may she rest in peace: 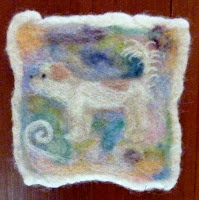 Well, I've wanted to post these as part of a farewell to her, and I was going to put in some examples of moving on (part of which is writing a book about her...she has quite a story), but actually there is still a lot of emotion going on and it might be a better idea to take a walk, get some coffee, you know...

That's all for now, but I'll probably be back sooner...