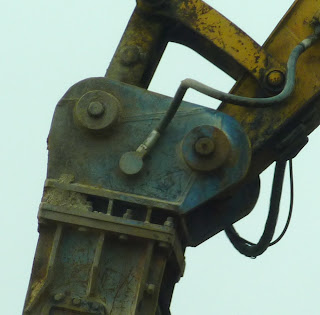 One day, on Jude's blog, there was mention of a "face plant" challenge posted on Arksparktheater.  The idea is you make a face on the street or in the forest then leave it there for someone to find, after taking a photo of it.  Well, this morning after yoga, at the local demolition project that I've mentioned before, was an earth mover, resting after its labors; this ready-made face was staring me down from up in the sky!  I don't know if it will count for the challenge, since I didn't create it, but, it was so amazing that I had to show you anyway.
That's a little strange so here's another white sand beach scene. This is Lake Anza in Berkeley, where I went to stitch one afternoon. Oh summer! 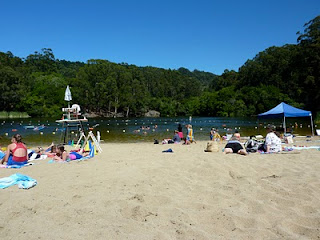 And speaking of stitching, I've been making patchwork beasts in Jude's class; we have only one week more...this is one I've been working on.  So far it's called Off Duty Nurse but that may change when her features and limbs are added. 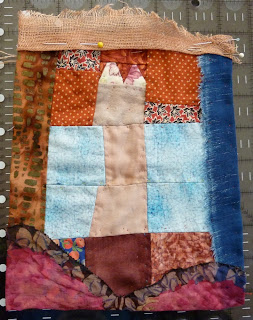 It's a great deal of fun and also challenging.

What a lovely trip it was.  Here is a scene from the last leg of my journey, looking out the parlor car window on the Amtrak Coast Starlight, of the Pacific Ocean, somewhere near Los Angeles. 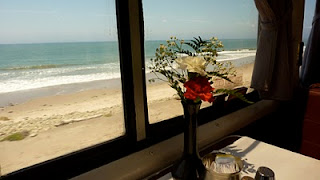 And here are the trains from the West (L.A.) and East (Chicago) meeting in Albuquerque, New Mexico.  It would have been easy to get on the wrong train (except for all the announcements warning us not to). 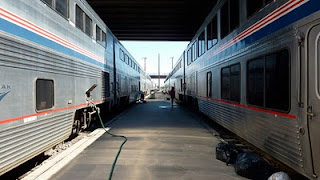 I worked a lot on this block for my grandson's quilt of my great great grandmother.  The photos were printed on silk for me by the Pixeladies, then I stitched over it to make sure it will withstand multiple washings etc. This sort of image has the added feature of being a little like a movie, because as the fabric moves around, in the course of being used, the facial expression changes, so the interaction can be very like a conversation. 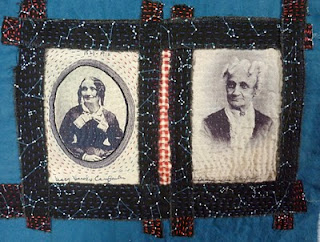 This is the beginning of a spotted pony I'm making for Jude's Patchwork Beast online class. These classes have been so wonderful; I will miss them...they have helped me see cloth differently and interact with it more lovingly. 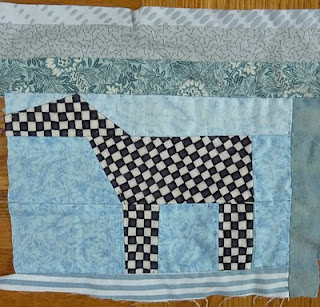 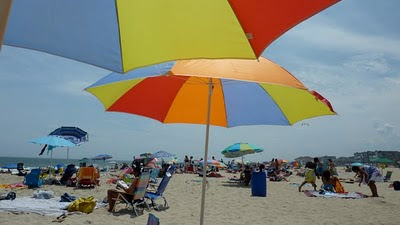 Well, now I'm in Washington, D.C. remembering the wonderful day at the beach with my family.  This is Belmar, New Jersey...the ocean was pretty rough but what a good time we had.  Haven't done too much stitching lately because of the incredibly good company I've been keeping.
Posted by Suzanna at 11:32 AM 6 comments:

Having traversed the continent...

Each year, I try to pack more sensibly.  This is my luggage in the train station, waiting for the train. 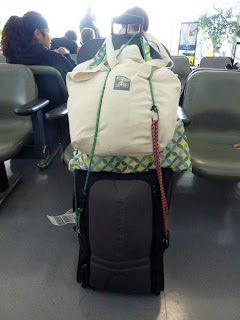 This is the menu.  The food is good and included in the price of the total trip (if you travel in a sleeping car) 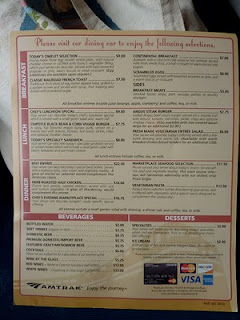 Here is my tiny room...all set up for stitching work! 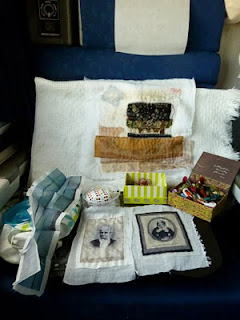 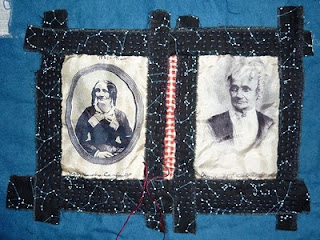 My great great grandmother...her image printed on silk, being stitched down.
Posted by Suzanna at 7:50 PM 8 comments: 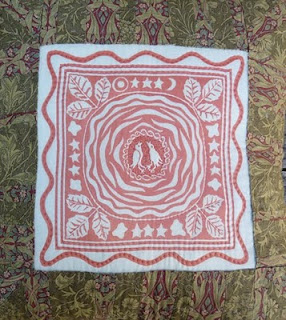 Here is the 10 year anniversary pillow that will arrive in time for my son and daughter-in-law's 11th anniversary.  And hopefully I will arrive there just about the same time.  The design was for their wedding.  Now there are 2 boys in the household also. I can hardly wait to see them all.  I'm taking lots of cloths to work on en route. Today is the 4th of July; I hear the fireworks, but am staying home.
Posted by Suzanna at 10:21 PM 6 comments: