We've been encouraged in my writing class to write a poem for National Poetry Month, which is just about to end, so here is mine:

How do we make it through the bad times?
How forgive?
How endure suffering when there's no way to help?

How forego the need for words when the silence is speaking? 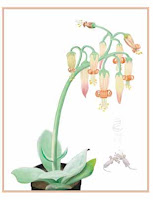 Call of the wild

Last night at 3 a.m. my dog Agnes began barking and jumping up and down on top of me.  Wearily, since she would not respond to my pleas that she focus on sleep, I arose to switch on the back yard light;  there were the wild raccoons mating in the moonlight.  It seemed voyeuristic to watch them too much so I switched off the light and tried to go back to sleep, but Agnes would have none of that and kept barking...she levitates a little with each bark and it is very cute, but it was so late.  One of the raccoons came over, put its' nose to the French door and watched her.  But for the glass, they were inches apart.  Agnes loved this. So, I think, did the raccoon. Eventually the wild beasts retreated and sleep returned.  Sorry, I could not take a picture!  Too much reflection. So instead, here are just 3 photos from my trip to Tucson.  More soon.

I wanted to drive down the east side of the Sierras to see the escarpment...that is where the Sierras rise up in sharp contrast to the geologically downward motion of the Owens Valley.  I hope I am describing this correctly.  I decided to take highway 50 and some other smaller roads to cross the Sierras (instead of Route 80, which is straighter).  Therefore it was a little scary at times! in terms of curvy roads and breathtaking vistas involving height.  So here are some samples: 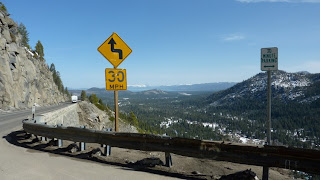 Above is a turn-out.  I am not a fast driver in the best of circumstances, but this sort of situation brings out the snail in me and I'm happy to let the faster folks go by.  We are going East through the beautiful Sierra Mountains. 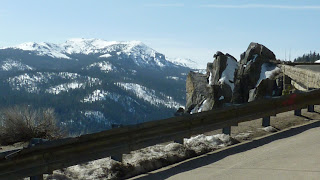 This is the same situation, looking in the other direction.  Can you imagine what it was like coming through here in a stage coach?? 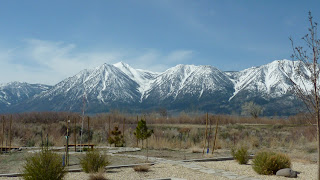 This is the escarpment! The eastern side of the Sierras.  They rise up in all their glory out of the more desert-like valley of Nevada.   I went to a little quilt store in this town...the Quilt House (Gardnerville, Nevada) and bought some fat quarters of flannel with pine cones and the like.
Posted by Suzanna at 11:28 PM 9 comments:

Ah, I am home for a while!  It was a long drive to Tucson and back but worth it for happy glimpses of family and scenery.  I will post some pictures later on, but for now here are the two pieces I've been working on, slowly making progress. 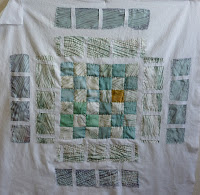 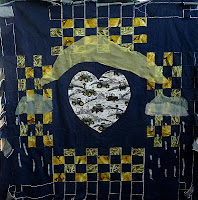 I've just pinned the sunshine and rainclouds on, but this morning I stitched the right hand cloud down a little: 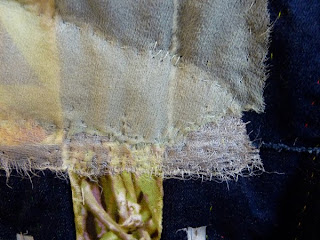 That is silk gauze that I dyed a very pale blue.
Posted by Suzanna at 3:32 PM 6 comments:

The Wild Life and an accessory 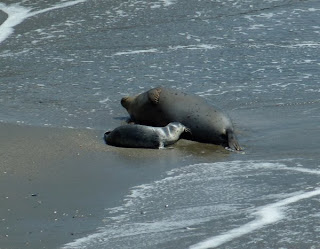 Just a few more pictures from Sea Ranch!  I'm learning slowly about the camera and these came out a little better.  This baby and mama washed up on the shore and the nursing started right there, with more waves washing over them.

The cormorants continued to fascinate me. 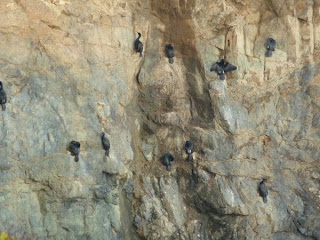 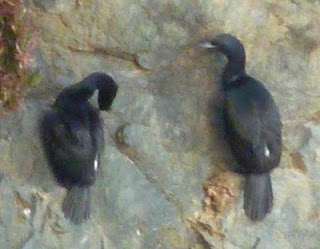 After the big storm, a rainbow. 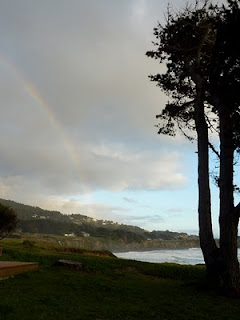 Kari's posting about understory, gave me an understanding of this: 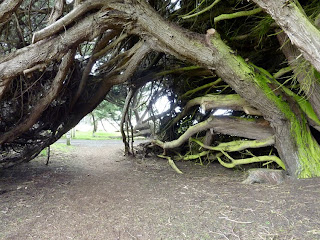 And lastly, here is one of the fabric bracelets I hope to offer in my shop! 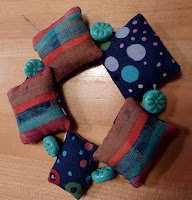 That's all for now;  I'm on the road to Tucson to visit family.
Posted by Suzanna at 8:29 PM 6 comments: 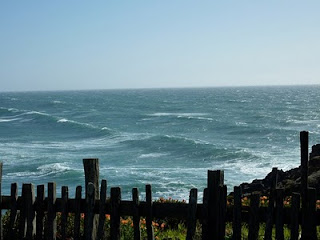 We've been having dramatic weather here.  Yesterday the internet vanished, but it turned out that by unplugging the router box, then plugging it back in after 30 seconds,  the connection returned.  Its' absence felt a little spooky;  here we are by this wild coastline, great chunks of which periodically slide into the sea. Somehow the internet feels like a tangible connection, a life-line. Of sorts. 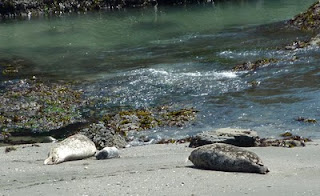 Seals!  See the baby? Evidently it was born just hours before I took this picture.  Usually at this time of year there are many more baby seals.  Who knows what has detained them. 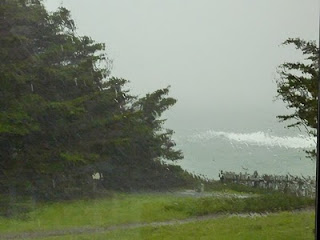 Today it has been pouring; this is the murky scene through my window. 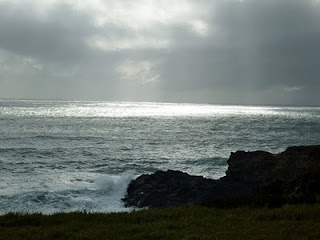 A brief respite from the rain. 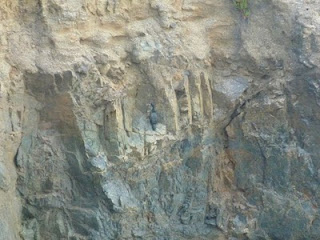 Here is the cormorant nesting area.  Can you see one practically in the middle, in a little niche?  At night there is a cormorant on almost every ledge. 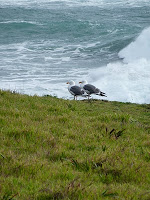 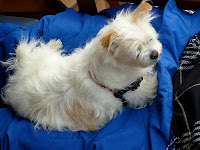 Agnes doesn't like the rain.  Only a lap will do.
Posted by Suzanna at 6:47 PM 8 comments: 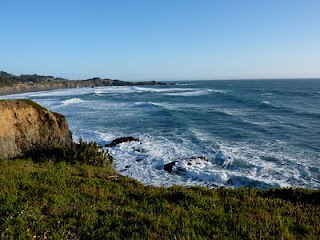 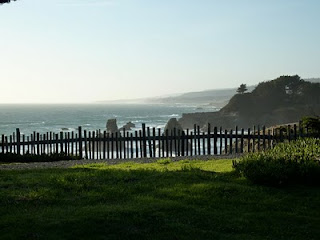 For four years, my dear friend Barbara and I have come to Sea Ranch on the Northern California coast for a week long work retreat/reunion.  We were high school friends many many years ago and this is a wonderful chance to catch up on life events;  work, and eat.  Her husband comes up for part of the time.  They do quite a lot of reading whilst I am upstairs working on projects.  I've brought 2 lap-robes to work on plus numerous smaller items.   One hope is to get started setting up an online shop.

Below is the lap-robe for my 95 year old farmer friend Alex.  It has tractors, asparagus and corn and later I'll add some embroidery.  I've been experimenting with Jude Hill's fabric weaving techniques on her video series.  I'm having a good time with this and really enjoyed ripping the denim! 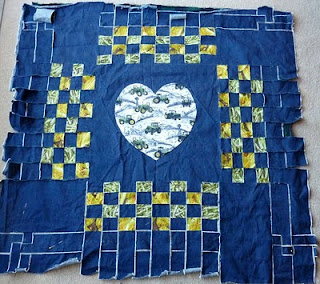 The other big project is below.  It doesn't have a name yet; it's silk and flannel.  The silk I dyed in the shibori class from Glennis.  It's growing from the inside out and I think will be another lap-robe. 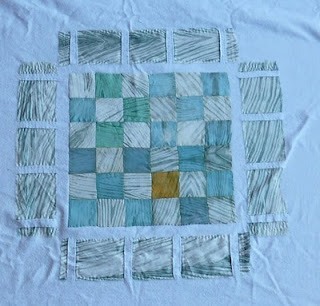